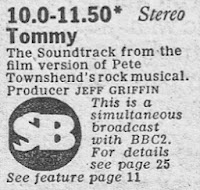 On BBC Four tonight there’s a showing of the rock opera Tommy.

As usual the authors of the weekly Creamguide, from those lovely people at TV Cream, have long memories and recalled that “when this film was first shown on the telly in the eighties it was the subject of a simulcast on Radio 1”.


Spot on! It was shown on BBC2 and heard on Radio 1 (straight after Peter Clayton’s Sounds of Jazz) on Sunday 29 August 1982 as part of Rock Week. In those pre-stereo TV days there were plenty of opportunities to experiment with simultaneous broadcasts and that year the little SB logo appeared in the listings for some of the Proms concerts and Wagner’s Ring Cycle.


In the kind of season that BBC2 sadly no longer does Rock Week also offered us GI Blues, Jimi Hendrix, That’ll Be The Day, Maze, Joan Armatrading, Squeeze, The Jam, The Last Waltz, The Doors, BA Robertson’s Jock and Roll, Stardust, The Police and Yellow Submarine. There was also a three-hour Bank Holiday Rock special fronted by David Hepworth and Mark Ellen.

It was a packed week on the telly as we also got the start of the Beeb’s 60 Years celebrations with plenty for nostalgia lovers with repeats of Dixon of Dock Green, Maigret, Stocker’s Copper, The World of Wooster and that creeky old film Death at Broadcasting House.
Posted by Andy Walmsley at 10:00