Rewind back to April 1976 for this Capital Radio programme schedule published in the pages of New Musical Express. 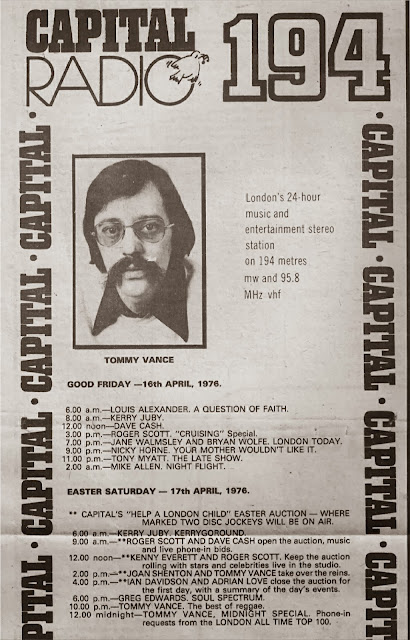 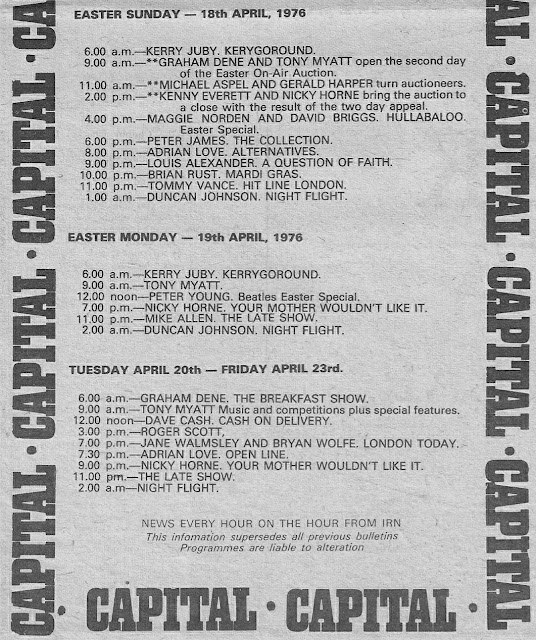 It’s Easter time and over the weekend there’s the second Help a London Child charity auction. Helping out with proceedings on Saturday from 9 a.m. are some very familiar names, whether or not you lived in the London area: Roger Scott, Dave Cash, Kenny Everett, Joan Shenton, Tommy Vance (with that moustache looking for all the world like some South American bandit!), Ian Davidson and Adrian Love.


Apparently Kenny initially saw the campaign as “an unwelcome diversion”, according to the recent biography Hello Darlings! “It wasn’t that Kenny was uncharitable, he simply didn’t appreciate how much of an impact radio could have in raising funds and awareness. He assumed it was just tokenism. Once converted, he went on to become one of Help a London Child’s most fervent campaigners, and would spend days preparing special episodes of Captain Kremmen”.


Looking after Easter Sunday were Graham Dene, Tony Myatt, those two smoothies Michael Aspel and Gerald Harper and rounding off with Ev and Nicky Horne
Posted by Andy Walmsley at 07:30