The Charts They Are a-Changin’

For chart enthusiasts it was all change on Tuesdays from October 1987. Tuning into Radio 1 at lunchtime – listening to Johnnie Walker, Paul Burnett, DLT or Gary Davies depending on your era – and noting down the chart positions ready for Sunday. Come Sunday you’d be there, finger poised over the pause button, waiting to record the latest chart entries. Admit it, we all did it!


“This show is going to kick everything else into touch,” boasted Bruno Brookes, bagging himself a Radio Times cover to boot. From now on chart release day was shifted from Tuesday to Sunday, requiring even more of a trigger finger for home tapers.

Broadcast the chart on the same day it’s compiled? Surely not!  When we now have chart shows that are updated to reflect sales and downloads during the programme it all sounds very quaint. Back in 1987 the chart manager at Gallup, Godfrey Rust, explained all to the Radio Times.


Of the 4,300 record shops Gallup selected a representative panel based on size of outlet, type of shop (chains like HMV, multiples like Boots or independents) and region. For the new chart this panel was upped from 250 to 500 shops.


Each of the panel shops has a little Epson data-gatherer and sales assistants key in each record’s catalogue number at the time of sale. The machine is connected to a telephone line and four times a week Gallup’s computer downloads the data. After the last update in the early hours of Sunday the chart is compiled.


The computer is able to compensate for incorrectly punched catalogue numbers, typically the first letter is missed. About 10 to 20 per cent of the information is rejected as “incomplete or unrepresentative.” For security a back-up system was maintained at Thame in Oxfordshire. 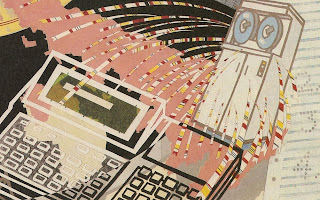 Anticipating the new chart and new show on Sunday 4 October 1987 Bruno said: “The Top 40 is already Europe’s most listened-to radio show. Now all of the music industry as well will have to be listening to find out where their records are. I can imagine executives and promoters jumping about making urgent telephone calls as I read out the positions, I like anything with a sense of excitement and this show tops the lot.”


And this is how it all sounded.

Here’s Paul Burnett with a Tuesday lunchtime chart rundown from September 1978. I can’t claim to have recorded this one; it comes from the pages of Radio Rewind.

From my own collection is this clip of Gary Davies, with his “Bit in the Middle”, and a chart from July 1984.
Posted by Andy Walmsley at 08:00