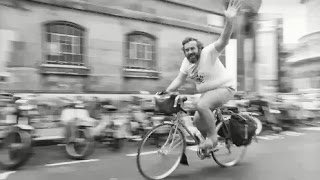 There are two indisputable facts about Tom Vernon. One, he was a fat man. Two, he rode a bicycle. That combination gave Tom a number of hugely popular series on radio and on television as he explored the highways and byways across France and around the world.


It all started with the Radio 4 series that first aired in late 1979, Fat Man on a Bicycle, billed as “Being the ponderous peddling of Tom Vernon from Muswell Hill to the Mediterranean and what befell him in the land of the French” His broadcasting style was, according to radio historian David Hendy, “humorous, gentle and idiosyncratic in a way that seemed perfectly natural to most Radio Four listeners”.


Tom Vernon was born in London in 1939 and would go first into teaching and then PR. At the same time he was performing, apparently “moonlighting as a period-costumed minstrel” and writing music.  The song-writing somehow led to occasional appearances on the Today programme where overnight he’d write a song about a current news story for broadcast the next day.


He was the first presenter on BBC Radio London’s breakfast show Rush Hour when the station launched in 1970. Indeed he was inadvertently the first voice on air when the engineers accidently put out his rehearsals during test transmissions.  As you’ll hear in the audio clips below Tom also found time to write the Radio London Song. He also presented In Concert alongside Michael Oliver in a programme that offered classical music, comment and criticism and a look at London life in A Better Place to Live.


At Radio London he would also read entire Victorian novels on the air, presumably they had plenty of time to fill. This included the whole of Pickwick Papers which he delivered in 50 episodes and acting 150 different voices, mixing in his own music and sound effects. “I was a one-man epic,” he recalled. That same rich voice would later go on to record Dial-a-Santa for the GPO.


Joining Radio 4 he was a producer and presenter for the nightly arts strand Kaleidoscope and a contributor to the review of weekly magazines programme News Stand. From April 1979 he became the first presenter of Feedback, the “bouquets and brickbats” programme that took over from the short-lived Disgusted, Tunbridge Wells.  Tom remained with Feedback for four years.


Here’s Tom Vernon with an edition of Feedback from 10 April 1981 where the burning topic is local and regional radio.

The idea for a cycle journey across France had its genesis many months before when he’d bought a second-hand bike at his local Oxfam shop for a fiver. Nicknamed The Black Pudding – “it was exceedingly heavy and acted as a vehicle for a great deal of fat” – it remained little used until one day when he was carless he hopped on it to go shopping, pretty soon he was cycling into the BBC and back.


It was in July 1979, now on a slimline Evans bicycle, that he set out set off from London across the Channel and down to La Grande Motte.“Le gros type à vélo”, his T-shirt proclaimed. Amongst his possession was a mini-Nagra tape recorder whilst his producer Joy Hatwood followed by car with a large stereo tape machine to help create their radio verité.  Explaining the impetus for the series Tom wrote: “A radio broadcaster is among the most detached of all. He lives under fluorescent tubes in a windowless studio, and handles words and ideas on little pieces of magnetic tape.  The temptation is strong to become more and more a processor of substitute reality, and not very different from a transistor in his tape machine. I wondered: Is there still a world out there you can touch?”


The first series proved very popular and led to a further four on radio and eight TV series for the BBC, ITV and Channel 4.


In the 1990s Tom and his second wife retired to rural France, in the Cévennes. He died last month of a heart attack, aged 74.

In this audio sequence you’ll hear Tom singing his Radio London song and talking about the early days of the station. There are clips from Fat Man on a Bicycle and reminiscences from radio producer Jenny de Yong, who worked on some of the later series. Sadly I have no copies of Tom’s radio series in my archive but surely they should be accorded a repeat on Radio 4 or Radio 4 Extra.