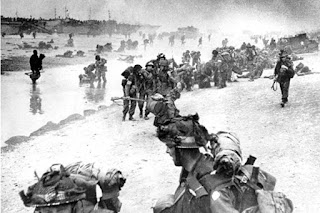 John Snagge’s D Day announcements on the BBC are some of the most momentous archive recordings ever. Less well known is the story behind the announcement of Communique Number One and the importance of the pink card that contained the historic news.


This audio is a recording not of the initial announcement but of the midday bulletin read by Snagge on 6 June 1944.
The story of the behind-the-scenes events at Broadcasting House and at the small underground cubicle beneath the Senate House of London University – the wartime HQ of SHAEF, the Supreme Headquarters Allied Expeditionary Forces – were recalled by John Snagge and Michael Barsley in their book Those Vintage Years of Radio. Snagge takes up the narrative:


“I had begun broadcasting many years before but in all those years, this was the most dramatic announcement I had ever made. It had an electrifying effect. The tension had been building up and increasing month by month, day by day, and finally hour by hour. As I read the announcement, from a pink card which had been handed to me at 9.15, I sensed the excitement, and knew what it would mean to the people at home, and especially to the resistance movement of the occupied countries in Europe.”
The story behind that pink card is also, in its own small way, dramatic. For the card had been written to be spoken by two announcers, and contained indications for Voice A and Voice B. The words were identical, but the announcement for Voice A had been crossed out in red pencil. Moreover, when Snagge went into his cubicle that morning (the broadcasting room was immediately below the Press Room, where the D Day news was given simultaneously and verbally) he realised that beside him another cubicle was the American military correspondent, Colonel Dupuis. His Voice A announcement, went out only to the troops waiting to go across to France to reinforce the initial landings.


What exactly had gone on, during the night hours, to make the change? Snagge takes up the story:
“We have to go back a bit. The date of the opening of the Second Front must have been one of the most closely guarded secrets of all time, and within the vast and intricate organisation necessary to mount such an assault, the BBC was destined to fulfil a special role – and to fulfil it according to the BBC method, that’s the important point. All the secrets have been out for years now – the last-minute postponement, the fact that the BBC Overseas reported the invasion two hours earlier, by quoting an Occupied Europe broadcast from Holland, and so on. But perhaps the victory of the BBC in insisting on the use of a well-known BBC voice first – which happened to be mine – has never before been properly emphasised. The man who won that victory was William Haley. As Director-General, he declared that the use of an American voice first would cause confusion, and that Voice A must not only be British, but be one of the regular, named announcers.”


The actual card of the announcement, with Voice A eliminated, was taken by Snagge back to Broadcasting House that day, and now hangs framed in his house. At one time, his friend Ed Murrow asked if he could borrow it, and when it was returned, the card was signed “To John Snagge, who first spoke these words on the air: Dwight D. Eisenhower.” Underneath are the confirming signatures: “Winston Churchill” and “Tedder” (Lord Tedder was then Eisenhower’s Deputy). 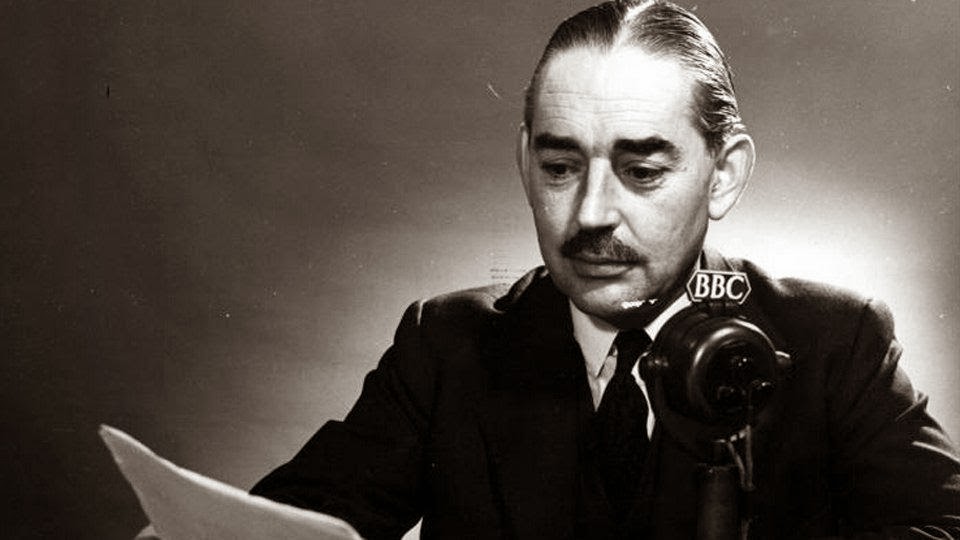 There were several more vitally important personnel involved in the D Day broadcasting story. As Head of Presentation, Snagge’s first job was to contact the Senior Superintendent Engineer, Leslie Hotine, and the man who put out European Service programmes, Gibson Parker. That was about three weeks before 6th June. The equipment was to be installed at SHAEF, not at BH. All programmes were to be faded, and linked with United Nations Radio. European transmitters would then put out an Alerting Period, with an initial call in English, followed by recordings made by Heads of State in their own language – Queen Wilhelmina, King Haakon, General de Gaulle, and so on. Snagge had to write out all his instructions in longhand, without secretarial help, until Senior Controller, Basil Nicolls, was able to supply his own personal secretary, who was within the magic circle. Frank Phillips recalls that he was in charge of Overseas announcements from Bush House, but said to Snagge “I don’t know what my instructions are.” Nor did Joseph Macleod, who was detailed for the Continuity announcing. The instructions were, of course, in longhand – in the safe.


So to 5th June, and Snagge continues:
“I had not been allowed to leave Broadcasting House for days. I couldn’t even leave the office – not even to make necessary physical calls – without informing Duty Officer. On the 5th, I went to bed as usual, with no indication that we were on the verge of D Day. But looking back, I remember that the engineer in charge, Leslie Hayes, had a habit of saying, knowingly, ‘You can sleep tight tonight,’ or something similar. He said it on the night of the fourth, but not on the night of the 5th! At about 4 a.m. my bedside phone rang. Jim Forte, the Duty Officer, said: ‘You must report to SHAEF headquarters at once.’ I rang Frank and Joseph, and told them to take up their positions. With Pat Ryan[who led the BBC War Reporting Unit] I walked the ten minutes or so over to Malet Street. I don’t remember what we talked about. At 6.30 a.m. Macleod opened up the Service normally, and according to programmes in the Radio Times. We sat and waited. We know we had dynamite to announce –at last.


“A sergeant brought me a slip of paper at 9.0 a.m., headed Topflight Zero 732 GMT. This meant that 0932 Double British Summer Time was the deadline.  I contacted Joseph, to transfer from BBC to me at SHAEF, To Frank Phillips I said ‘Get the keys of the safe from Gibson Parker,’ and gave him zero hour. I had to scribble my own introduction to the Announcement on the pink card. Colonel Dupuis started his broadcast first, but only to his limited audience. The moment I heard him announce the invasion of Europe I went ahead too. After reading the momentous words, I repeated them, and again many times during the day, to the first War Report.
“To while away the time of waiting, some of the high-ranking British and US officers around that tiny studio organised a two-shilling sweepstake on the exact hour. I won eight shillings with my estimate of 9.0 a.m., and still have the odd scraps of paper on which we wrote down our estimates. Such is radio history.”


Extracted from Those Vintage Years of Radio by John Snagge and Michael Barsley published in 1972 by Pitman Publishing.
There’s more about War Report in a blog post following later today.
Posted by Andy Walmsley at 10:30