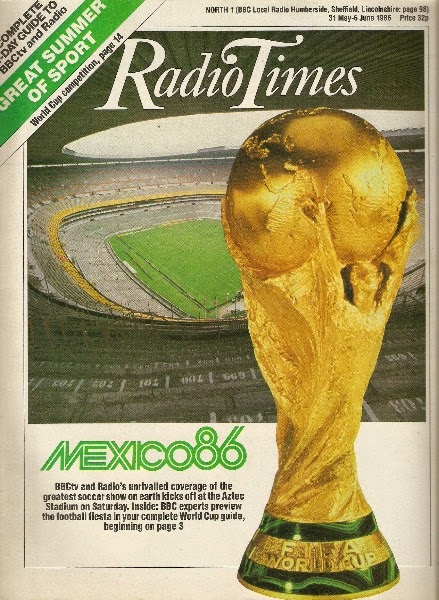 The World Cup returned to Mexico for the 1986 tournament with time difference leading to 7 p.m. and 11 p.m. kick-offs UK time. There was plenty of home nation interest as for the second time running England, Scotland and Northern Ireland all qualified.


Radio 2’s match commentary, all on medium wave, starts with the Group A opener on 31 May: Italy vs Bulgaria. Commentating are Mike Ingham and Peter Jones. Over on BBC1 they precede coverage of the opening ceremony and game with the classic Whatever Happened to the Likely Lads? episode, No Hiding Place. 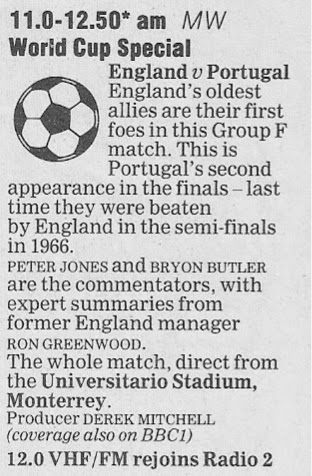 Commentary on the first round matches involving Northern Ireland comes from Mike Ingham and Mark Robson. At the time Mark worked for BBC Northern Ireland and would later move to UTV and then Sky Sports as part of their rugby commentary team. Scotland’s matches were covered by Mike Ingham and Roddy Forsyth with analysis by Denis Law. Print journalist Roddy joined the BBC in 1986 and would become the Scottish Football Correspondent for Radio Sport; he remains a regular on 5 Live’s sports team.

This is part of a World Cup Special from 3 June 1986. Can anyone identify the theme tune please, it's been bugging me for days and I'm convinced I have a copy of it somewhere. (Edit: It's Aztec Lightning by Heads).

Meanwhile the England matches had commentary from Peter Jones and Bryon Butler with summaries by Ron Greenwood.  Only England progressed to the second round and then onto the quarter-finals before defeat against Argentina and that famous ‘hand of God’ goal. Commentary on the final on 29 June (Argentina vs West Germany) was again a Jones/Butler commentary. 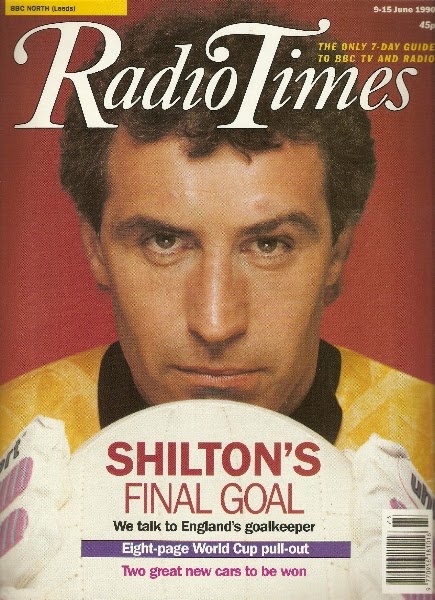 Italia 90 introduced football fans to Nessun Dorma, John Barnes rapping and the pain of an England penalty shootout. It was Radio 2’s final tournament – Radio 5 would take over all the sports coverage from August 1990 though that station didn’t actually get round to handling a World Cup tournament – and as usual it was on medium wave only and confined to home nation matches; this time England, Scotland and the Republic of Ireland. Theplanned coverage was of the opening game, the semi-finals and the final. With Ireland and England progressing beyond the group stages there was some added quarter-final action too.

Radio 2’s coverage was presented by John Inverdale, who also fronted the Wimbledon programmes when they started, including some joint programmes when the tennis and football overlapped. The Radio Times is a little light on who commentated on which game but the listed team are Mike Ingham, Alan Green, Ron Jones with expert analysis from Denis Law and Ray Clemence.


With Scotland once again in the running, commentary on those games was also carried on Radio Scotland – can anyone confirm the commentary team? On 16 June there was a clash of 8 p.m. kick-offs so whilst Radio 2 carried England vs Holland, Radio Scotland carried Sweden vs Scotland.


Additional World Cup news, and some commentary, was heard on Sport on 2 with Jon Champion and Sunday Sport with Charles Colville. The Republic of Ireland’s match against Egypt was heard on Sunday Sport for instance.  There was also an extra World Cup Report each evening after the 11 p.m. news.


The final (West Germany vs Argentina) on Sunday 8 July was covered in an extended Wimbledon 90 and World Cup 90 programme from 2 p.m. to about 9 p.m. as the Men’s Singles Final took place that day too. 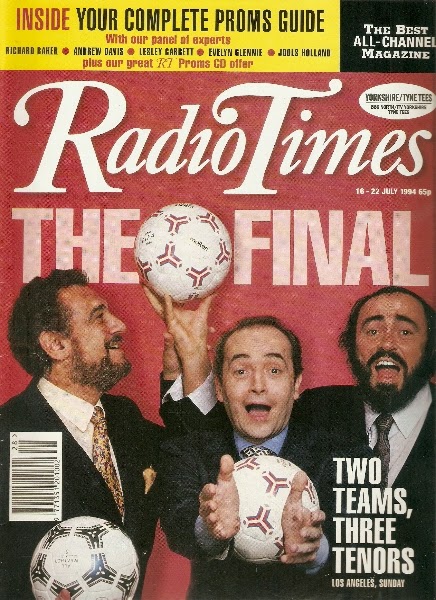 By the time we get to 1994, Radio 5 Live had arrived – replacing the short-lived Radio 5 - and there was plenty of airtime to fill. Football was more popular than ever due to Sky Sports upping the ante and over on ITV we had the adaptation of the stage play An Evening with Gary Lineker.


The 5 Live coverage was linked by Jon Champion though were it overlapped with Wimbledon we had John Inverdale, or on Tuesday evenings as part of Inside Edge presented by Jonathan Legard. There was also coverage as part of Saturday’s Sport on Five with either Ian Payne or Marcus Buckland and on Sunday Sport with Eleanor Oldroyd. The commentary team in the USA was Mike Ingham, Alan Green, Ron Jones  and Rob Hawthorne. Providing the expert analysis were Mark Lawrenson and David Pleat.


The only ‘local’ interest was the Republic of Ireland so in the first week we also had commentary on Germany vs Bolivia, USA vs Switzerland, Germany vs Spain, Italy vs Norway and Brazil vs Cameroon as well as Ireland’s match against Italy. The final on 17 July (Brazil vs Italy and the first to be decided on penalties) coincided with The Three Tenors Concert from the Dodger Stadium in LA. This was broadcast on both BBC1 and Radio 2.


And that is where I leave the World Cup for the time being. Further posts may follow in four year’s time, assuming we qualify.
Posted by Andy Walmsley at 09:00

An article in the Times claims that "Brian" (sic) Butler was also part of the team for the 1990 World Cup - commentating on the England-Cameroon quarter-final alongside Mike Ingham. This would have been his last major tournament as a commentator.

Also Peter Jones, rather than Mike Ingham, commentated on Brazil v Northern Ireland alongside Mark Robson. Odd that they didn't send Alan Green, who was already established as a network commentator and had just co-commentated on his first FA Cup final for Radio 2 - though he really needed the football explosion of the 1990s to become what he eventually became.

(The second paragraph above refers to 1986, obviously)

The theme to World Cup Special on Radio 2 in 1986 was Aztec Lightning by Heads, which was also used for BBC TV's coverage of Mexico 86.

Alan Green briefly left radio sport to be an editor on Sportsnight so I guess that's why he was missing in 86?