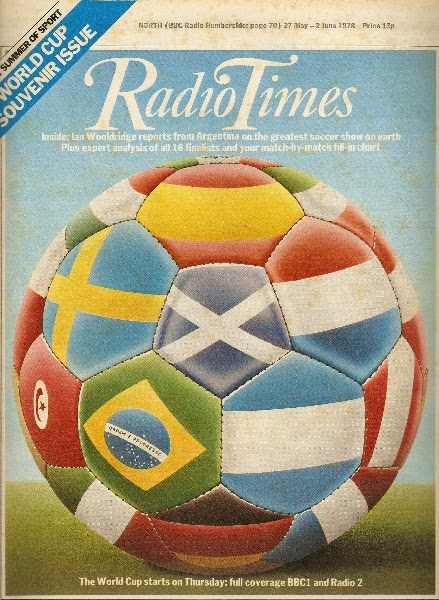 
All the radio coverage is on Radio 2 and we start to see a gradual increase in the time devoted to the tournament. The weekday 15 minute Sports Desk broadcast at 18:45 is extended to nearly half-an-hour and on days when there’s play an additional Sports Desk goes out at 23:02 just before Round Midnight.


For the first time the opening ceremony and the opening game (West Germany vs Poland) are covered. Commentary (all on long wave only as Radio 2’s music programmes continue on VHF) is by Peter Jones and Alan Parry, with David Francey of BBC Scotland again joining the team for Scotland’s group matches. “Expert comments” come from Denis Law. 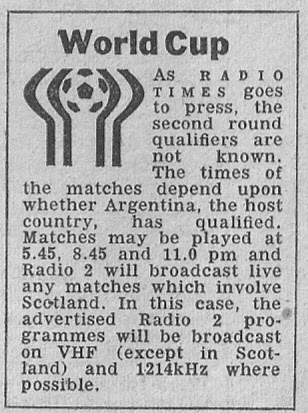 In addition to Scotland’s games (they don’t progress further than the first round) there’s commentary on the Italy vs Argentina game. The only other commentary is the final on 25 June (Netherlands vs Argentina) with Peter Jones, Bryon Butler and Denis Law.


It’s also worth mentioning an “all-star entertainment” that acted as a prelude to the tournament: Good Luck, Scotland.  Broadcast on Radio 2 on Bank Holiday Monday (29 May) it’s now perhaps best known for featuring the last-ever outing for Steptoe and Son in a specially written 15 minute sketch called Scotch on the Rocks (there’s a poor quality version on YouTube). The hour-long show also featured Ernie Wise, Janet Brown, Michael Hext (Young Musician of the Year), Peter Morrison, Tom Conti, Helen McArthur, The Pipes and Drums of the Royal Scots Dragoon Guards and the Max Harris Orchestra. Writing some of the material were Barry Cryer and John Junkin. 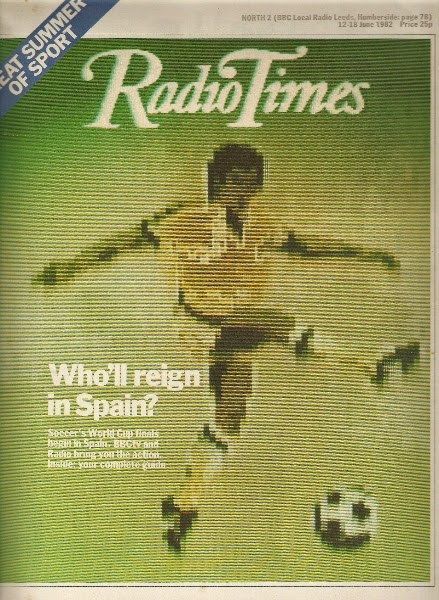 With three ‘home’ countries in contention – England, Scotland and Northern Ireland – the 1982 World Cup coverage had to step up a gear. In the first week from Spain, Radio 2 (now on medium wave) offered a match a day between Tuesday and Friday.

Commentary on England’s games was provided by Peter Jones and Bryon Butler, with expert analysis from Jimmy Armfield. Looking after the Scottish matches was George Hamilton and David Begg with summaries from Frank McLintock. George Hamilton continues to commentate for the World Cup for RTE and is part of their 2014 team. David Begg worked for BBC Scotland and this was his first World Cup. He continued to commentate north of the border until his retirement in 2012. Meanwhile the Northern Ireland commentary was by Alan Green and Peter Brackley. Alan Green had only recently joined BBC Sport and is, of course, commentating at the 2014 for Radio 5 Live. Peter Brackley had been on Radio 2 since the late 70s but this was to be his last World Cup for the BBC as he joined ITV at the start of the 1982/3 season. 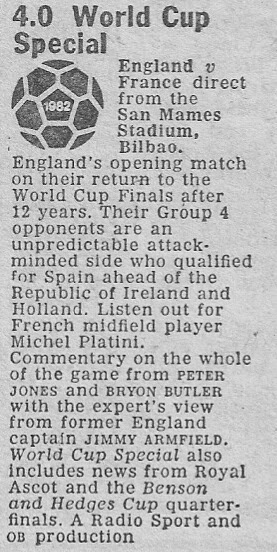 With so many games to cover there was, for the first time, a clash of sporting occasions when, in week two, the afternoon kick-offs coincided with Wimbledon. The tennis coverage was presented that year by Mike Ingham (normally it would’ve been Peter Jones), and Mike was also the regular host of Sport on 2 at that time. There were combined Wimbledon/World Cup Special programmes on 25 June and 1 July.  As usual the music continued over on VHF with Ed Stewart and David Hamilton, though both were on holiday on some point that month and cover came from the continuity announcers Don Durbridge and Colin Berry. 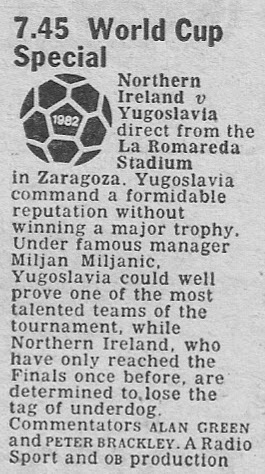 As only England and Northern Ireland progressed to the next round and then both failed to go further, there was no other commentary until the final (Italy vs West Germany) on 11 July. Presenting was Mike Ingham with match commentary from Peter Jones, Bryon Butler and Jimmy Armfield.