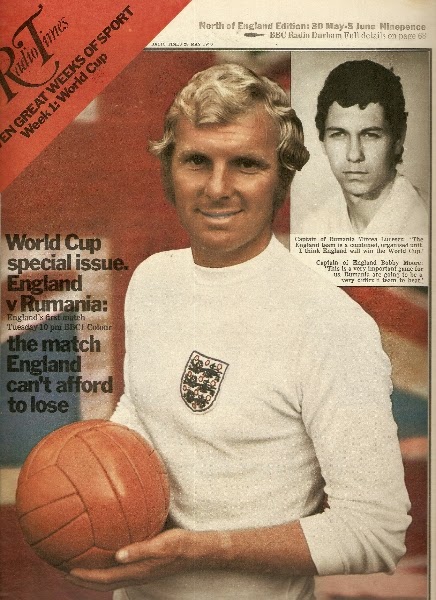 The first World Cup of which I have a clear memory of is the 1970 tournament held in Mexico. I’d cut out a full-page colour photograph of the England squad from the back of the Daily Express – a broadsheet back then – and sellotaped it to a large board.  England where knocked out by Germany in the quarter-finals. Their record Back Home fared better and made number one that May.


I happen to have one back issue of the Radio Times that covers that World Cup – a photo of Bobby Moore adorns the cover. BBC TV’s daily coverage was hosted by David Coleman, Frank Bough and David Vine but on radio - unlike today’s almost continuous coverage – commentary was wholly concentrated on the home nation games – in this case just England-  apart from the final and one of the semi-finals.


Although we now associate Radio 2 in the 1970s and 1980s as being the home of radio sport, the 1970 World Cup matches were broadcast exclusively on Radio1’s 247 metre wavelength.  At the time this was not as unusual as it may now seem. From Radio 1’s launch in September 1967 it had regularly carried any midweek matches, although, confusingly not all such matches – some still appeared over on Radio 2. For example on 29 May 1968 the European Cup Final (Benfica v Manchester United) was on Radio 1 whilst the following week on 5 June the semi-final of European Nations’ Championship Cup (England vs Yugoslavia) was on Radio 2.


The radio commentary team was Maurice Edelston, who along with Brian Moore, Alan Clarke and Simon Smith had covered the 1966 competition, Bryon Butler, who’d become the radio football correspondent in 1968, and Peter Jones. Peter had joined the BBC in 1966 as a sports assistant and had been involved covering the Group 4 and the quarter-final matches played in the North-East in that year’s World Cup. He joined the rota of presenters of the Saturday afternoon Sports Session in late 1967 and was the first host of Sport on 2 when it started in April 1970. 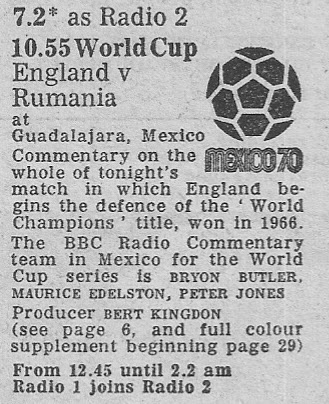 The 1970 coverage differs from that four years earlier as listeners were now treated to commentary of the full game for England’s group stage matches, and not just second-half commentary. We did get second-half commentary on a semi-final (possibly Italy vs West Germany) and most of the final (Brazil vs Italy) on 21 June just after an extra programme, Summer Solstice, that followed Alan Freeman and Pick of the Pops.

For the 1974 World Cup it was Scotland that was the sole representative from the UK. All commentaries were now on Radio 2 long wave. Listeners to Radio Scotland (on VHF and MW) also heard carried the match commentaries. Scotland’s third group stage match was covered as part of that Saturday’s Sport on 2.


Commentary was provided by Peter Jones and David Francey, who was a regular commentator for BBC Scotland, with analysis from Mike England. Presenting the coverage was Alan Parry who’d joined the sports unit from BBC Radio Merseyside in 1973. Apart from Scotland’s matches there were no further commentaries until the final (Netherlands vs West Germany) on 7 July with Jones and Parry.


Thanks to Robin Carmody for helping me fill in some of the gaps.
Posted by Andy Walmsley at 09:30

Andy - as I mentioned to you the Guardian and Observer suggest that the BBC followed the pattern hinted at in Radio Times, and didn't start commentary on the 1970 World Cup final until half an hour in, with a programme called 'Summer Solstice' filling the gap after POTP.

In fact Scotland's evening matches in the 1974 World Cup were *not* carried on Radio 1: 247m is listed in Radio Times as carrying the music-based output on Radio 2 VHF, presumably so listeners without VHF radios could hear it. Also Radio 1 still had its late-night VHF simulcasts at the time: the cutbacks would not come until January 1975 and it would never have regular mid-evening output of its own until January 1979 (originally planned for November 1978).

Also, BBC Radio Scotland hadn't started yet in 1974: there was simply a Scottish optout of Radio 4. According to the Guardian, this certainly broadcast commentary on Scotland's three matches, but for the first game it is claimed to be "as 1500m" so it might simply have been the same commentary as on Radio 2.

Thanks Robin. I used "Radio Scotland" as a shorthand for the R4 service in Scotland though I think by then it was given that name on air anyway. Perhaps listeners north of the border in the mid-70s can confirm that.

Yes, scrub the bit about Radio 1. Post written in a bit of a rush this week. There had been evening progs on 247m in the early days but these were eventually dropped in the early 70s.

Would it be possible to revise the post to reflect the comments I made. Hope this is OK ...

Robin - amended. Also tracked down a 1974 Scottish edition of the Radio Times and they do indeed bill "Radio Scotland" on the Radio 4 page.