Down Your Local - Swansea Sound

This is the seventh post in a series looking at the original nineteen ILR stations. This week Swansea Sound.
Airdate: 30 September 1974
Still on air?: Yes, on its original AM frequency. FM is now The Wave.
Like many of the early ILR stations Swansea Sound had a very varied programme diet. Managing Director Charles Braham proclaimed that the station had “something for everyone. In our first week we had a brass band, choirs, schools quizzes, sport and local talent”.
The Swansea Sound was the only bi-lingual broadcaster in the first of the 19 ILR stations. The first Welsh advert was heard some 9 months after going on air for the South West Electricity Board
Here’s the Radio Guide programme listings published in December 1977: 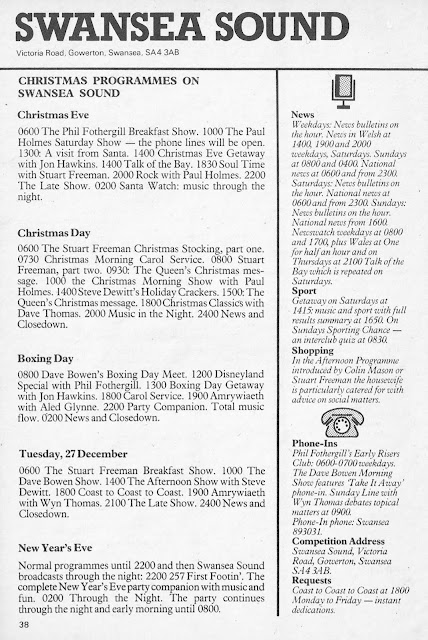 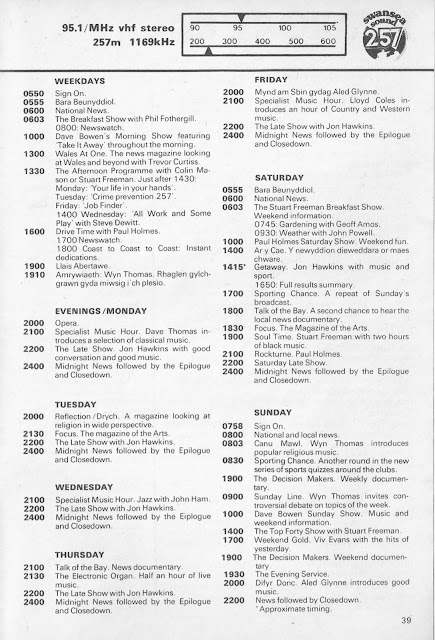 Breakfast host Phil Fothergill (ex BBC Radio Brighton) was on the station from the start with the Saturday Breakfast Show.
Back in 1977 in the afternoons and on Saturday mornings was Stuart Freeman. Stuart had started as a club DJ in the north west before moving to Germany to work for the US forces radio. Back in the UK he joined Swansea Sound and later was a tv newsreader and announcer for HTV. A short spell at 2CR in Bournemouth preceded more overseas work at Blue Danube Radio and 4FM in Vienna.
Dave Bowen gained experience working for hospital radio and running a mobile DJ show before joining Swansea Sound as a presenter of specialist music shows including a country and western show, of which he had no knowledge. He got his weekday show when Crispian St John (real name Howard Rose and who also broadcast as Jay Jackson) left the station.
Wyn Thomas, who had been at HTV, looked after the bi-lingual aspects of the stations output as Head of Welsh Programmes. Welsh programming constituted 12% of the output..
This is the station information published in January 1978: 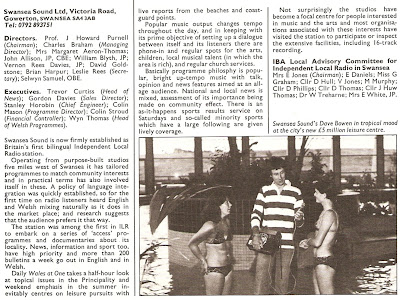 Dave Bowen was at the ill-fated Centre Radio, then Radio Aire as breakfast host and programme controller. He later turned up at GWR doing a strange split shift, 9-11 am and 2-3 pm. More recently, a lengthy weekend run at Real Radio Wales.

Studying the schedule, I'm struck by the number of religious items - a thought for the day in Welsh, epilogue in English, midweek Godslot magazine and two half-hours on Sunday - when, oddly, they seem to close earlier than the rest of the week.

I believe the IBA at the time regarded Swansea as an experiment in seeing just how small a service area could support commercial radio, so the diverse schedule presented here is particularly impressive.

Chris Harper opened Swansea Sound and did the breakfast show for quite a while. He'd started off in hospital radio with Len Groat. Chris was poached by Beacon in August 1976.