This is the seventeenth post in a series looking at the original nineteen ILR stations. This week Radio 210 from Thames Valley Broadcasting.

The contract for the radio licence for the area was awarded by the IBA to Radio Kennett with the recommendation that the two other bidding groups, Radio Thameside and Radio Thames Valley, be allowed to participate. By launch date the company traded as Thames Valley Broadcasting Ltd with the station known as Radio 210, making it the only one of the first ILR stations to be solely known by their medium wavelength. However, broadcasting on 210 metres meant the station battled each evening with Radio Luxembourg on 208 metres. The studios were set in tree-lined gardens in Tilehurst just outside Reading, Berkshire. 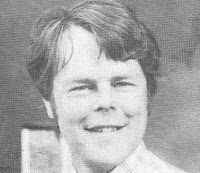 Managing Director Neil ffrench Blake promised that they would be an easy listening station, the first since the old pirate Radio 390. Speaking in 1979 he also went on to say that “we don’t employ disc jockeys, we employ broadcasters. Disc jockeys are people who play records in discotheques – and if they’re good they say nothing. (Broadcasters are) people who have something to say between records. And that’s why we have a reputation for professionalism”. 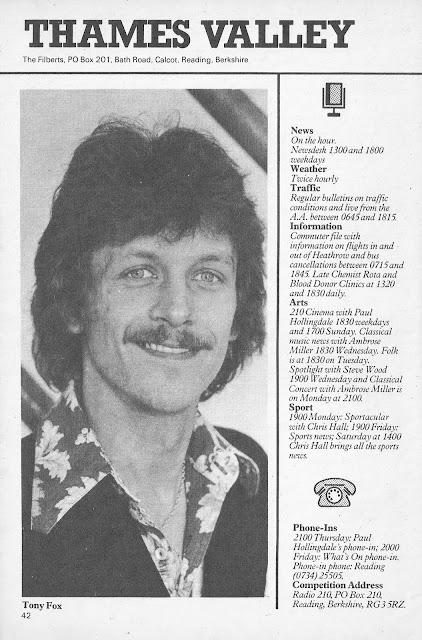 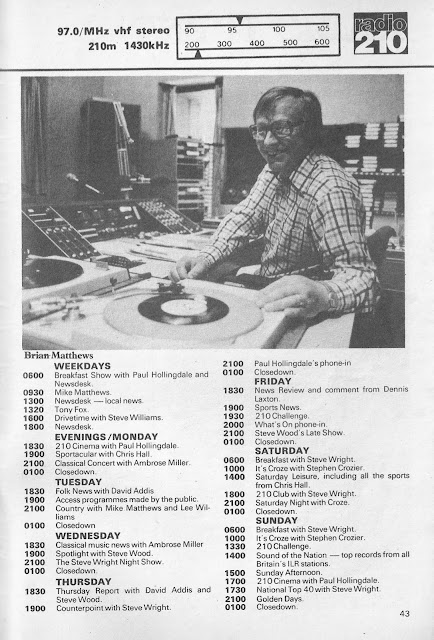 The Breakfast Show was in the safe hands of Paul Hollingdale. Paul was certainly used to the early rise as he’d presented Breakfast Special on the Light Programme and Radio 2 from 1965 to 1970; his was the first voice on both Radio 1&2 when they started in 1967. His broadcasting career began with the British Forces Network in Germany. He then helped to set up CNBC (part of Radio Veronica) and next joined Radio Luxembourg. After leaving Radio 2 he moved into music management and also worked at BBC Radio Brighton before launching Radio 210. Paul’s interest in the movies is evident in the 1977 listings as, in addition to the breakfast slot he presented 210 Cinema. Note that on Thursday evenings he had a four hour phone-in until 1 a.m. and was then back on air at 6 a.m.


In 1979 Paul helped set up Blue Danube Radio in Vienna and he remains in Vienna to this day working for ORF and Inflight Productions. but in the interim had spells at LBC, Chiltern Radio, Country 1035 and on Sky TV. Hear an interview with Paul on his website.

Mike Matthews is pictured in the Radio Guide listing though they seem to have got confused between him and Brian Matthew. Mike gained his broadcasting experience in New Zealand, where he co-hosted Family Favourites, the United States, BBC Radio Brighton and on Radio 4 for whom he made some documentary programmes.

Of all the DJs listed in this ILR series the best known still to have a daily show is Steve Wright. Back in 1977 he was working on weekend breakfast, the chart show and a couple of mid-week evening shows. His celebrated shows on 210 with Mike Read had by now ceased as Mike had moved on to Radio Luxembourg.

Steve had been a local newspaper journalist before working for LBC. His first broadcast was in 1975 on Radio Atlantis in Belgium. After three years at 210 he also joined Luxy but there, he told the Radio Times in 1983, he felt “very uncomfortable, everything was so different, so cosmopolitan” and he hankered after Corrie and digestive biscuits. By 1980 Steve was back in the UK and on Radio 1, the rest, as they say, is history.

This is an oft-repeated clip of Steve on 210:
Steve Wright

At the weekend It’s Croze was Steve Crozier. He had worked on the sales team at 210 before getting in front of the microphone. Subsequently he broadcast on Capital Radio 604 – the one based in South Africa – LBC, Melody FM, KTN in Kenya and then moved to Santa Barbara. Steve is now a broker but still dabbles in radio in his home studio. Hear Steve Crozier on the opening day of Capital Radio on their website.

I am light on information about afternoon DJ Tony Fox, pictured above, other than he had worked at LBC and is now deceased, nor news editor, later Programme Controller, David Addis (ex. BBC Radio Oxford) or drivetime host Steve Williams.
.
With its close proximity to London, Radio 210 was able to draw some national names, they probably lived in the area anyway. In 1978 Bob Harris joined as did Pete Drummond who presented the Top 40 show. A year or so after that Radio 2 presenter and newsreader Jean Challis was on air for a spell. By 1979 the team changed considerably with the introduction of John Hayes (another UBN alumni), Gavin McCoy (who had been at Beacon and would later work with Wrighty on Radio 1), Howard Pearce and Keith Butler (see Radio Victory post). 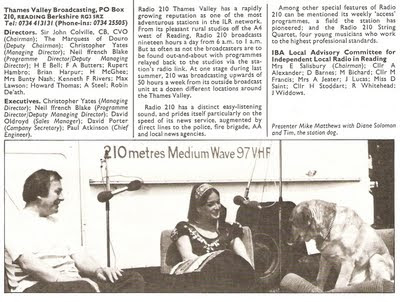 With thanks to Martin Peters
Do you have any audio from 210’s early days? If so please contact me.

Email ThisBlogThis!Share to TwitterShare to FacebookShare to Pinterest
Labels: Down Your Local, ILR, Steve Wright

I think the Steve Wright quote here *really* sums up why I don't like him.

210 had problems picking up listeners early on I think, not just because its MW frequency was far too close to Luxembourg's, but because Capital and LBC were audible within much of its transmission area (the only original ILR station outside London where that was the case). Later it was one of the first stations to get the GWR "Better Music Mix" format in the early 90s, which I think sums up Reading as a place in some ways.


Nice to see some one curating the early days of 210.
Good job! Yes I do live in Santa Barbara California, however I am not a (stock) broker but I do own an advisory firm. I have a daughter and son also in SB, and 'live the life' overlooking the Pacific! I also stay in touch with some of the Calcot peeps, many of whom i re-discovered on Facebook.
Best wishes, Steve "Croze" Crozier

I have nothing but fond memories of working there (1979-81). A great team of people, both on and off-air, and an encouragement to everyone to be creative, which made for some great radio moments.... Dave Glass

I worked with Radio 210 for about two and a half years from June 1976, first of all logging records for Steve Crozier then as a news writer and reader under David Addiss alongside Chris Hall on sports and Andrew Baddenoch. I also hosted some current affairs, Theatre and What's On shows from time to time. My name was Sarah Russell at that time. I moved to Vancouver Canada in 1980 and went on to become a Team Leader within Mental Health working with youth with Anorexia and Bulimia. I loved working in Radio but they told me in Canada I would have to lose the accent! I now live in Nanaimo also overlooking the Pacific having retired last June.

Hopefully Sarah Russell (Horsley) will see this and kindly drop me a line please in relation to 210 - thanks, Mark Watkins Email : mark.210@btinternet.com

Just to add I have created a website celebrating the history of Radio 210 www.radio210.co.uk with many photos and clips ranging from 1970s to 2000s - if anyone has any clips, photos or anything else they can add, please e-mail me 210thamesvalley@gmail.com - also if any ex presenters see this, I am going to start a podcast, interviewing presenters about their time, memories and anecdotes while at 210.